From the series Las Temporadas depicting 4 seasons - 12x 12 inches , each.

Winter comes in different forms in different countries. It's a season that one prepares for, especially in places where it snows or the temperature gets really cold! Food storage, warm clothes, heating and firewood are all different elements leading to the expectation of this season. We get a respite from the heat but at the same time we face the iciness of life. Winter is a season with many layers! It is also the season with many festivals, all over the globe. Who hasn't wanted to be part of a white Christmas or be in Lapland at this time?
Raag Malkauns is said to be a winter Raag, a raag with minor notes rendering a serious and sombre mood. Lore has it that this raag was sung to cool down the simmering temper of Lord Shiva ( Indian God). 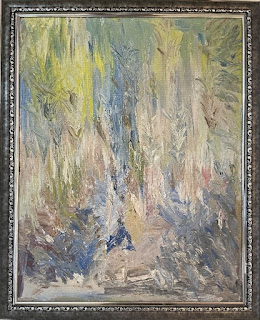 A part of the series Las temporadas, this work depicts Summer. The season has its own sense of beauty. Bright greens and florals blooming against a blue sky , Summer brings many important things to us- vacations, holidays, travel and of course, in India, mangoes ! 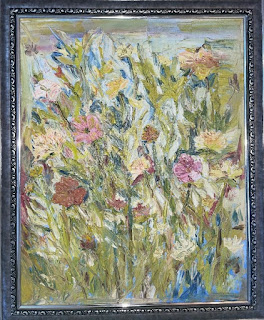 I loved doing this. Getting back to my familiar flourish was a combination of delight and therapy. This artwork is a representation of all the undulations of the year gone by. The pandemic, still raging strong, changed lives for all of us. Being homebound and working away at our computers gave us a different way of life. As for me, my routine has changed. I used to yearn for my colours and painting time like a thirsty animal. So when I started being home at all times, I diverted my mind at times with many other things than art. Online courses, movies and music. But am back and how!

This has to be Spring, the Primavera! 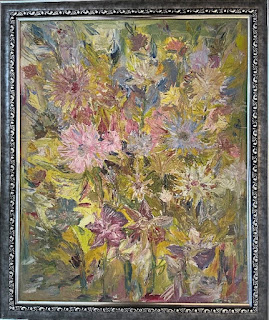 El Ontoño from the series Las Temporadas.
Autumn is one of the most mysterious seasons. It embodies hope, giving away the old to welcome the new. It's one of the most beautiful seasons all over the world.The Raga associated with the Indian season aligning with Autumn (Sharad) is Bhairav, a sombre morning Raag, which has minor notes.
This painting gave me a lot of movement. I was on all fours whilst working on this and gave me some workout in these days of being shut inside! 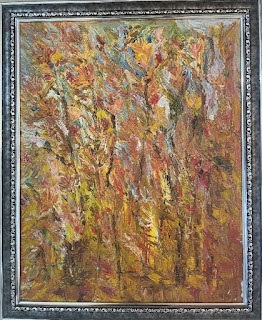 Posted by Kasturi at 5:37 AM No comments:

Prisoners of Secrets - Painting for a Book 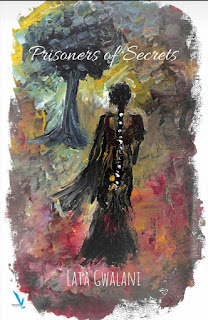 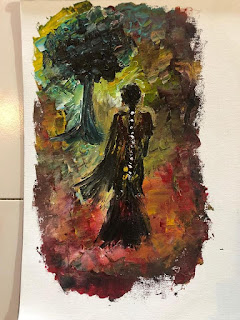 When author Lata Gwalani asked me if I can do a cover for her upcoming book, I was excited! However, this proved to be so different from a usual painting I would do for someone, or for an exhibition!
I had to make a painting which spoke volumes about a volume ( pun intended) !
We met in a cafe one fine day and she gave me a brief about the book. It wasn't so easy as she had to let me know enough, without my knowing enough! The book was yet to be released you see and she couldn't divulge the entire plot! I had to understand the chief protagonist, Mira and the importance of a certain tree in the whole story and come up with a work which revealed enough to create intrigue but not enough to let out much or look too cliche!
Over the next few weeks, I did a few drawings which all went into the bin. Finally after another call, I understood I needed colours to create that magic and aura of the story. I went straight to the canvas and made this work. Yes, that was it! She liked it, her husband liked it and so did the publishers!
It consumed quite a few of my sundays.
Lata, am dying to read the book now.
The Kindle version has been released on Amazon but me, am a real touch and feel reader! Waiting for the physical version of the book to be released.
Posted by Kasturi at 6:04 AM No comments: 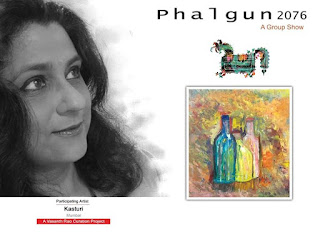 My series " Bottled Inclusion" was displayed in Phalgun 2076, a group show in the prestigious Bombay Art Society in Mumbai in February 2020.

Incidently, the painting titled "Pride" from this series was also used in my workplace Pride Week Celebrations 2020 as a piece for Art Expression to open conversation and raise awareness and dialogue around Inclusion.

Well, we all come in different shapes, sizes and colours. Don't let society bottle you into who you should be. Wear your own colours with pride! 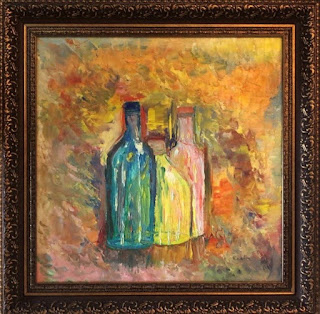 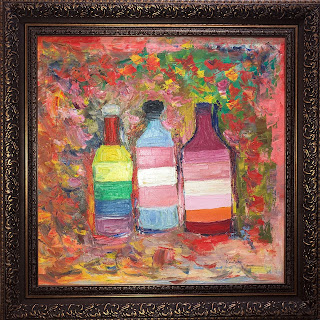 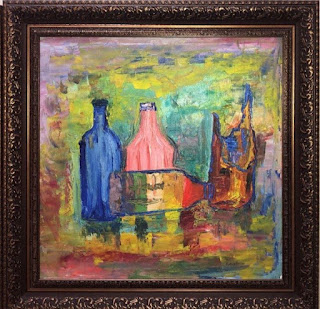 Perfect
Posted by Kasturi at 12:46 AM No comments:

A rendition in Raag Des I performed  in the inauguration ceremony of   Naari Narayani show in Bombay Art Society.﻿


A series of paintings , inspired by Indian Classical Raagas (North Indian). Six of these pieces were showcased recently in Naari Narayani Dwitiya, an exhibition by 17 women artists, on the theme 'Rivers of India', curated by artist Vasanth Rao. Just as a Classical music concert moves from Morning to Evening and back to morning again , singing Raagas from different time periods of the day, I have imagined the daylight on the waters of a river. Beginning with a morning Raaga f...rom the Bhairav family, the concluding piece in the concert is a morning Raaga from the Bhairavi family.

This exhibition was a different experience for me. Extremely tightly curated, the concept and research itself started since more than six months before the exhibition. Then meetings, drawings, submissions, rejections, composition finalisation, colour composition and finishing touches. I feel I have reached somewhere, though according to the curator, my journey has just begun. I have to work really hard! #raagaproject
Note: A Raag or a Raaga is a musical setting in Indian Classical music, using at least five of the seven notes, wherein compositions are made using these notes and some prescribed rules. 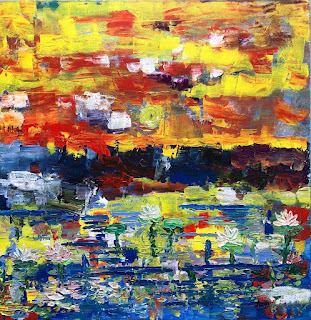 The sun breaks through the morning skies, casting beautiful, bright but calm colours into the waters of the river.In India, morning river is used for a holy dip and offerings to the Sun God.Bhairav is often the opening composition in a concert, associated with calmness and solemnity . Sung early in the morning, it is also associated with Lord Shiva. Many devotional songs are composed in this Raag 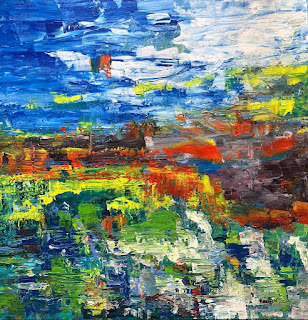 .
Jaunpuri . 24x 24 inches. Acrylic on Canvas.
Mid morning light on waters of the river. Raag Jaunpuri is sung during mid morning to noon, as some folklore suggests that this Raag took birth in the darbar ( gathering in a royal court) of the Sultana of Jaunpur. The Raag has an appeal of grandeur and has also been widely used in Carnatic Classical music 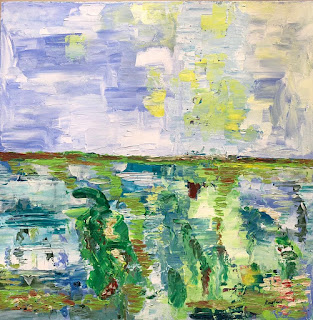 The afternoon light is steady and composed on the waters of a river. It neither has the trepidations of the morning , nor the in-between uncertainty of the mid morning. It is nice and lazy . Brindavani Sarang, an afternoon Raga, is also a Raaga sung in the Summer Season. 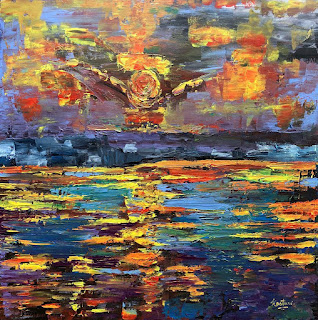 The river at dusk is full of romance.Many a courtship has bloomed in this light . The river is heavy with the secrets of the day and waits in anticipation of the beautiful night! Raag Poorvi is sung at dusk and has a mysterious and quiet nature. Though not a very commonly sung Raaga, some of it's related Raagas are more commonly sung.#poorvi 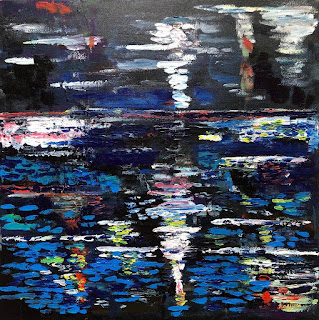 The night river is still but deep with emotions of its own. The same river which was shining with the glints of the sun during the day is now shimmering with the shine of the moon and stars . The night
river is dauntingly beautiful, yet heart tugging!  Bageshri is sung late at night and its compositions often speak of the angst of a woman waiting for a lover who has gone to another land . 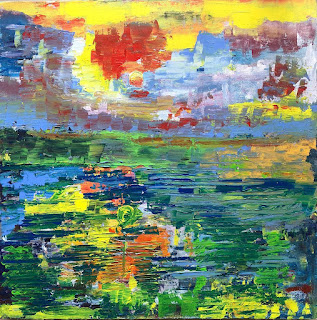 Bhairavi. 24x 24 inches. Acrylic on Canvas.
The morning dawns with great promise , as the light rays of the sun break through the waters of the river. It is time to rejoice the end of a full cycle from morning to dusk and again back to dawn!
Bhairavi is a morning Raaga which is often sung as a concluding piece in a musical concert. The concert which opens with a morning Raaga ( Bhairav) and traver...ses through the different time periods ( prahar) , has now passed through the night and as dawn breaks, it ends with Raaga Bhairavi. It is time to go home. Start a new day! Bhairavi is associated with sweet minor notes and the mood is pleasant and compositions in this Raaga are replete with modulations. In mythology, Bhairavi is also deemed the consortof Bhairav ( Lord Shiva). Many light and semi classical compositions like thumris ( semi classical , sweet compositions) are based on this Raaga.

Posted by Kasturi at 8:50 PM No comments: 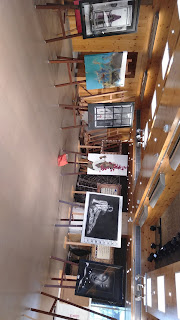 My Painting Serendipity got exhibited in Lit-o-Fest 2019 , by Gallery Art Desh managed by artist Gautam Patole. Was nice to be a part of this prestigious gallery! ﻿

"Basant" in a Noida home 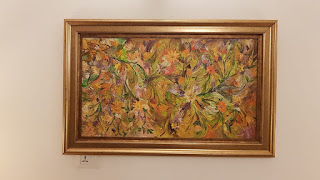 My Painting Raag Basant 2, finally reached the Noida home  for which it was made! It takes pride of place in the exquisite set-up of the drawing room, above a beautiful setee!

A lot of planning and toil has gone into this work. A complete dry run with samples made to match the colours of the upholstery theme and sizing went into the pre plan! The painting itself took me three weekends and then almost a month of drying time. As about the courier, that was another story. But finally there it hangs, resplendent in the golden frame! 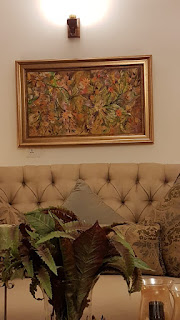 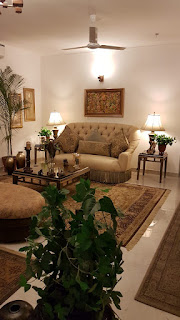 My blog post was published, some months back, as an article in Powaiinfo, an emagazine released from Powai, Mumbai.
http://powai.info/2011/05/26/kfc-hiranandani-powai-oil-on-canvas-board-30-x-40-cms/
A feature on me on the zing blog, which features people with entrepreneurial spirit:
http://zingcc.blogspot.in/2012/02/do-you-know-what-artpreneurship-is.html
My blog post published:
http://powai.info/2012/03/21/afloat-sunday-painting-at-powai-lake-by-kasturi-borkotoki/
A feature on me done by Newspaper Planet Powai:
http://www.boyaoilpainting.com/news/144.html
Painting my World, my daughter's artwork.

"Art is the most intense mode of individualism that the world has known. "
Oscar Wilde